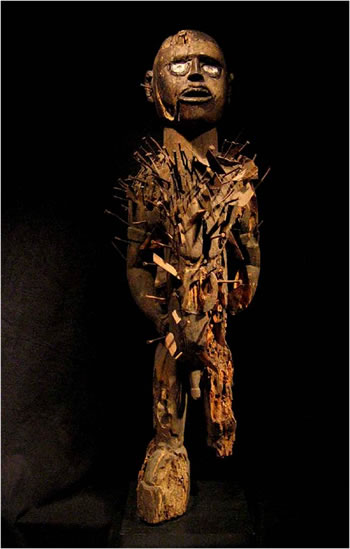 What do you think is the significance of the surface texture of this figure?

What parts of this figure is your attention most drawn to? Why do you think the sculptor might have emphasized those parts?

The Denver Art Museum describes the Nkisi as:

“… a device, record keeper, or tool for dealing with social issues. Minkisi (plural) have both public and private functions. Historically, they were used by individuals, families, or whole communities to destroy or weaken harmful forces, prevent or cure illnesses, ward off bad deeds, solidify contracts or oaths, and resolve arguments. Nkisi are intended to create a frightening effect; it is the sculptor’s job to create an image that implies force.

Ritual experts, or nganga, mediated between conflicting parties and aided individuals seeking help. In the case of a dispute, a representative from each side of the conflict would hammer a piece of metal into the nkisi figure. In disputes over land, for example, sealing an oath by hammering a nail into the nkisi would be sufficient to secure the land for generations. Contracts and personal vows could also be confirmed in this manner. A person’s word was sealed by attaching a personal item, usually drawn from their body—a piece of cloth, hair, or even saliva—to the nail or blade before it was hammered into the figure. Each party is then bound to honor the terms of the agreement. Nganga would memorize the circumstances attached to each nail and blade. In cases where an nganga was asked to cancel a vow, it was crucial not to remove the wrong nail, since each nail concealed an oath or agreement.”

One of the figure’s legs and other parts of his body have been eaten away by termites, small bugs that primarily eat wood. Look at the other works in the African collection and consider other ways they have been or could be damaged.

What kind of promises do you make? How do you seal the deal? Make a list of other ways people make treaties and covenants that you know about.