From the Director, Alex W. Barker

In these troubled times there’s only one thing still sure to make the gods laugh—well laid plans. Robert Burns’ saying is as applicable today as when it was first penned two and a half centuries ago, “The best laid schemes o’ Mice an’ Men gang aft agley.” But like the mouse, museums need to make plans even in the face of uncertainty.

There has been much discussion recently regarding plans to potentially move the Museum of Art and Archaeology (and its sister institution, the Museum of Anthropology) from Mizzou North back to an undetermined location on campus. Certainly we’d like to be more integrally involved in the intellectual life of campus, especially as recent research demonstrates that museums are uniquely positioned to advance many of the core values and initiatives of the University of Missouri, including creativity, innovation and interdisciplinary learning. And museums are, by their nature and mission, effective (and affective) gateways between the campus and the community.

So while we plan to return to campus someday, there are no firm plans at this point for our return. Museums always plan for the long-term, but for practical reasons we use a more proximate planning horizon of about three years for larger exhibitions and other major initiatives (and constantly adjust along the way). Based on what we know today, we plan to be in our current location for the next three years—but we’ll adapt to changing circumstances and challenges as needed.

Those same themes of resilience, adaptation, and response to change run through our scheduled exhibitions for the coming year. Studies in Classical Beauty examines the rejection of Gothic conventions in favor of classical representations of beauty inspired by the more naturalistic aesthetic ideals derived from antiquity; each year students in art still come to the Museum’s Gallery of Greek and Roman Casts to hone their skills and develop their eye by drawing from forms created millennia ago. British Humour: Satirical Prints of the Eighteenth and Nineteenth Centuries traces the role of caricature and satire as forms of resistance and forces of change during the zenith of Great Britain’s power. Vasarely’s Cosmic Visions explores how Hungarian-born artist Victor Vasarely (born Győző Vásárhelyi) used Op Art to meld artistic and scientific visualization; Vasarely began his formal studies in medicine before switching to a private academy to become a painter.

A small exhibit featuring pre-Columbian pottery from the Chancay and Chimú cultures of coastal Peru continues, showcasing ceramic techniques and conventions from two ancient societies endlessly adapting to the vicissitudes of the El Niño Southern Oscillation (with effects so profound that a few scholars suggest that the collapse of civilizations like the Moche was due to its effects). You’ll also see changes in our Modern Gallery (Seeing Anew: A Reinterpretation of Modern and Contemporary Artworks from the Permanent Collection) with rotation of light-sensitive works on paper, simultaneously ensuring the proper preservation of our collections and freshening the galleries with new and rarely-seen offerings. And as the new year begins, we’ll prepare for Objectified: The Female Form and the Male Gaze, a larger exhibition—in a different space than our usual temporary exhibitions—that challenges both male privilege in art and our own biases and assumptions as viewers.

Our plans include you, too. All of our collections are now accessible online at http://maa.missouri.edu/collections so you can search and create your own groups of favorites from the 16,000 works in our permanent collections and we’re offering a range of programs and events for visitors of every age and interest.

I hope your plans will include us as well, and I’ll see you at the Museum. 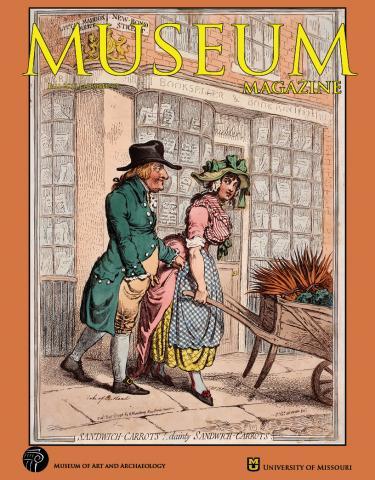