From the Director, Alex W. Barker

Audrey Hepburn once said that “living is like tearing through a museum. Not until later do you really start absorbing what you saw, thinking about it, looking it up in a book, and remembering—because you can't take it all in at once.”

She was equally right about life and about museums, probably in more ways than she intended. Museums are places of memory, both in the sense of celebrating and preserving our shared heritage and different highlights of the human career and in the sense of being an experience that is often as vivid and meaningful in retrospect as in the moment. Museum experiences stay with you, changing your perception, broadening your understanding, informing your judgment. They open you to other ways of seeing, and to a wider range of ways of responding to the human condition.

That impact is not always immediately apparent. The first time I brought my eldest son to the museum where I worked he seemed barely interested, but years later he recalled every moment, including details I’d never noticed myself. He taught me more than I taught him; museum visits are seeds that may take years to sprout, and many more to bear fruit.

For Hepburn, too, the early experiences she curated as memories and absorbed over time bore fruit. While she became a special ambassador for UNICEF in 1988, she’d begun her involvement three decades before as part of the UN’s 1954 “My Most Unforgettable Child” documentary about children subject to war and strife around the world, informed in turn by her experiences as a child in occupied Arnhem.

In the months to come we’ll be offering a range of Museum experiences for you to curate as memories and absorb over time. Electrify! brings a nationally-juried show of contemporary art from emerging young artists with disabilities, each bringing their own unique experiences to their artwork. Longtime Museum friends will recall that we hosted an earlier version of this exhibition a decade ago. Electrify! will be on exhibit until shortly after our always-popular “Art In Bloom.” Reinstallation of our permanent collections in the modern galleries will follow, and the return of some familiar works—along with some that haven’t been shown before. While we’ve been excited to offer an inspiring series of special exhibitions in the modern galleries (Rooted, Revived Reinvented: Basketry in America; The Lasting World: Simon Dinnerstein and The Fulbright Tripytych; Electrify!), we’re also exhilarated at the opportunity to reinterpret the permanent galleries for new audiences.

Japonisme in Print: Japanese Style/Western Culture examines the influence of Japanese woodblock prints on western artists, including Mary Cassatt, Henri Rivière, and John Taylor Arms. It’s followed by Pre-Columbian Pottery from the Museums’ Collections: Ancient Peru, the first in a planned series of occasional exhibitions showcasing the rarely-seen Pre-Columbian collections of both the Museum of Art and Archaeology and our sister institution, the Museum of Anthropology.

Page-Turners: Medieval and Early Modern Illustration considers a different kind of influence—the interplay of image and text in illuminated illuminated/illustrated manuscripts, early printed books, folios, and broadsheets. Each of these focus exhibitions examines artworks from a different perspective, allowing you to experience both the works of art and the Museum in very different ways. You probably can’t take it all in at once. That’s okay—you can come back as often as you like.

And then remember those experiences over the years to come. 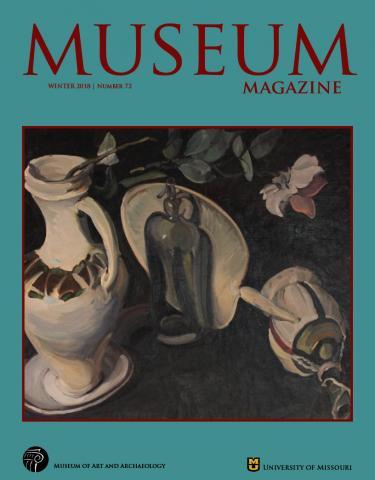