This large painting shows Abraham, the first of the Hebrew patriarchs of the Old Testament.

To test Abraham's faith, God commanded him to make an offering of his son, Isaac (Genesis 22:2–13). Torn between great love for his son and his desire to obey God's command, Abraham decided that his duty to God ultimately took precedence. He bound Isaac, laid him on the altar, and drew his knife. At that moment an angel of the Lord called out to him, saying, “Do not lay your hand on the boy,” said the angel. “Do not do the least thing to him. For now I know that you fear God, since you did not withhold from me your son, your only one.” (Genesis 22:12) Greatly relieved, Abraham saw a ram caught in a thicket, which he sacrificed instead of Isaac.

Abraham's Sacrifice of Isaac has many characteristics art historians associate with the Baroque period. Strong diagonal lines dominate the composition. Theatrical lighting called “chiaroscuro,” with strongly contrasting light and dark areas illuminates the scene. The moving figures strike dynamic poses and are caught at the most dramatic point in the story. In Abraham's face we see both the anguish of a father about to murder his son and the surprise and confusion of a human confronting an angel. The suggestion of interrupted action is made even more dramatic by the representation of the knife suspended in mid-air. 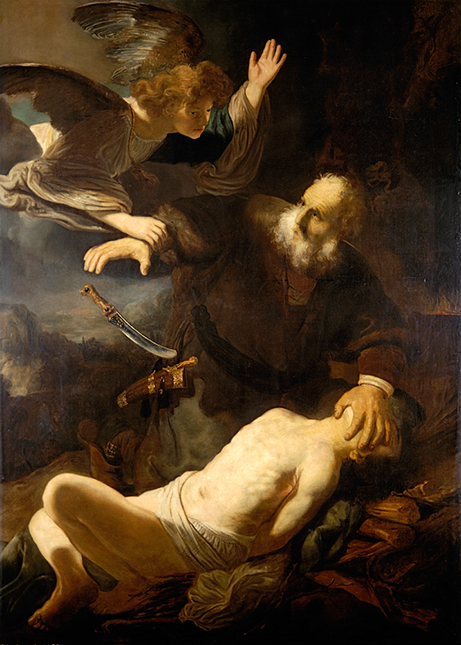 The name of the painter of this work is unknown, but art historians can tell a lot about the person by looking carefully at the painting. This painting is very similar to a painting by the famous artist, Rembrandt. It is so similar in fact, that some scholars believe the two paintings must have been painted side by side. The original Sacrifice of Isaac by Rembrandt is now located in the Hermitage Museum in Saint Petersburg, Russia. The size of the Museum’s painting, 83cm x 132cm, is close to that of the original, 193cm x 132cm, again demonstrating how similar they are. The painter of the Museum’s Abraham's Sacrifice of Isaac is clearly not Rembrandt himself because the Museum’s painting lacks Rembrandt’s expertise. The way the anatomy is painted, for example, is not consistent with Rembrandt’s style.

Compare and contrast with Melone’s Madonna and Child. How are these religious figures presented differently?

Why do you think someone might have painted a painting that was almost exactly the same as one painted by Rembrandt?

Rembrandt's Sacrifice of Isaac at the Hermitage: https://www.hermitagemuseum.org/wps/portal/hermitage/digital-collection/...

More about Rembrandt and other paintings by “Followers of Rembrandt:” http://www.nationalgallery.org.uk/artists/rembrandt