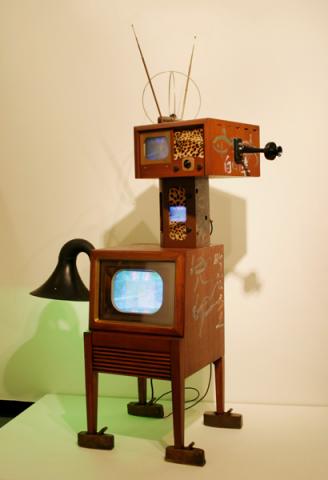 How does looking at this sculpture make you feel? Why do you think it makes you feel that way?

What kind of images do you think might be shown on the screens if you were viewing this work in person? Why do you think that would be an appropriate choice?

Why do you think the artist created an animal shape out of mechanical objects instead of simply creating a realistic looking antelope? What is he trying to communicate with that choice?

The Anten-nalope is part of a series of animal sculptures Paik designed in the 1990s. The sculpture is made from television cabinets, a vintage phonograph horn, an antique telephone mouthpiece and other items. Paik was inspired by cave paintings of animals, and the Antennalope encourages viewers to think about their relationship with nature in an age of technology.

The televisions play a synchronized video montage with flashing shapes, colors, images, and video clips. Many of the clips show antelope running in their characteristic serpentine fashion and other show cheetahs and other predators in pursuit of their prey. This might invite viewers to consider their relationship with nature in our modern technological world.

Nam June Paik grew up in Seoul, Korea, moving to Tokyo in 1950 during the Korean War. After studying philosophy and music in Germany, he became involved in the Fluxus movement of the 1960s with George Maciunas, Joseph Beuys, John Cage, and others. Members of Fluxus organized “performances” that blurred the lines between art, theatre, music, and vaudeville. Following the lead of Marcel Duchamp and the Dada artists of the 1910s and 20s, these avant-garde performers placed objects, animals, and people in unusual settings or environments and allowed their movements, actions and reactions to contribute to the meaning of the works.

In the 1960s, Paik’s experience with Fluxus inspired him to become a pioneer of video art. For him, the kinetic television screen was one of the twentieth century’s most universal and enduring symbols.

The Bamana Antelope headcrest shows the same animal as Paik’s Anten-nalope. How are they similar or different? Which do you think looks more like the real animal?

Today many people are more familiar with animals on a video screen than they are with actual living creatures. Do you think technology distances us from nature or it bring us closer to to the natural world around us?

The Smithsonian American Art Museum’s website provides detailed information about and images from the recent exhibition of Paik’s artwork and materials from the Nam June Paik archive, acquired by the museum in 2009:

Fun with Fluxus! What is it? What isn’t it? Learn more about this movement that defies definition: