In what kind of setting do you think this relief might have been originally carved? Why might the ancient Egyptians have made it?

What images do you see in the hieroglyphs? What do you think they might mean?

This relief was carved into the superstructure of an Egyptian tomb. It shows Egyptian divinities enthroned around tables heaped with offerings to them. Above the scene is the winged disk of Horus of Edfu. On the far left is the falcon-headed god Horus (who is not the same as Horus of Edfu), and facing him are his parents, Osiris and Isis. Osiris wears a beard, a tall crown with two ostrich feathers, and he holds a crook and flail. All of these features are symbols of his rule as king of the afterlife. Isis, Osiris’s wife and the mother goddess, sits next to him, wearing a different crown with two feathers. There is symmetry and repetition as the right half of the stone duplicates the scheme of the left half: two gods facing one. At the right of the center is Hathor, a goddess of fertility, wearing a headdress with two cow horns and a sun disk. The other gods on the right half are Anhert and his consort, the lion-headed Mehyt. This relief would once have been brightly painted, like the reliefs in Queen Nefertari’s tomb from a slightly earlier period. 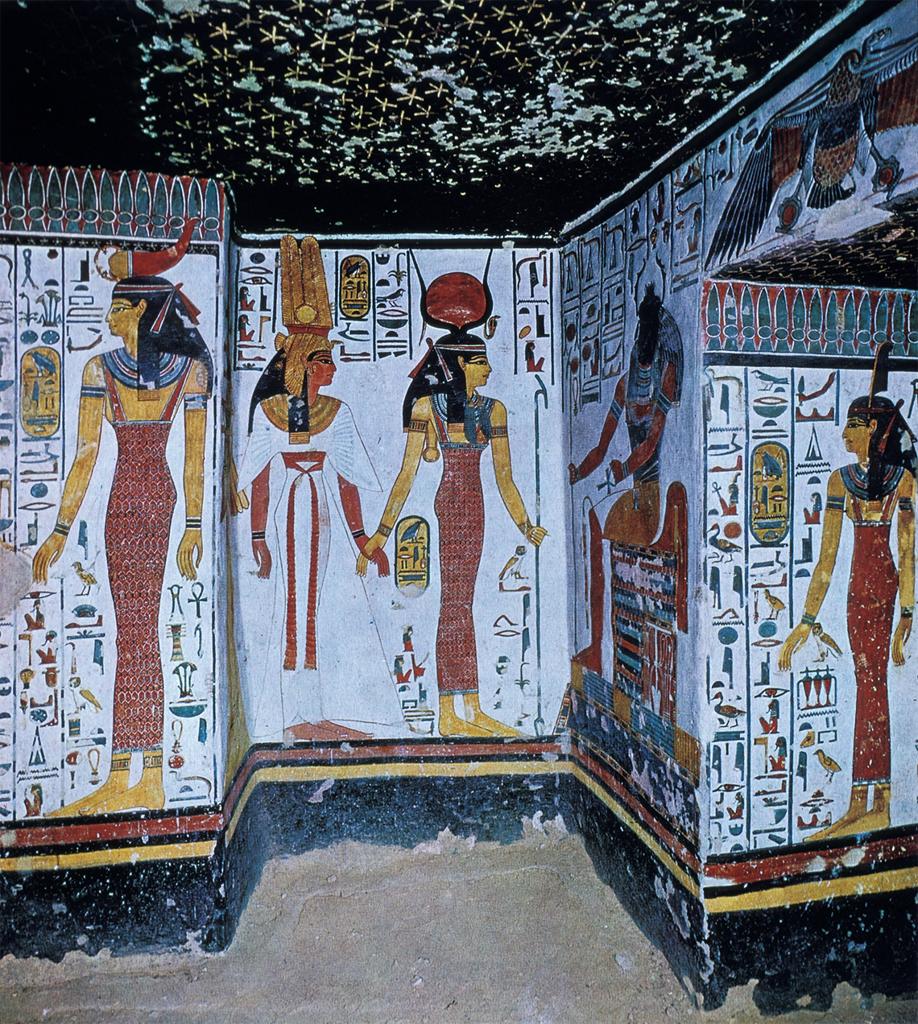 Above and around the gods on the Museum’s relief, you can see hieroglyphic text. Hieroglyphic writing began as pictograms. You can still see pictures in the writing on this piece. Hieroglyphs stand for sounds or ideas and can be read left to right, right to left, or top to bottom depending on which direction the symbols are facing. The text here names and invokes each god.

Notice the plants in the relief. They are lotus and papyrus, both of which grow along the Nile River. This river is 4,132 miles long and flows from south to north. It is the longest river in the world. Ancient Egyptians depended on the flooding of the Nile to fertilize their fields so they could produce food for them and their animals. Most of Egypt’s population lived near the banks of the Nile.

Connections
How does the tomb relief compare to gravestones found in cemeteries today? How do we commemorate the dead today?

Compare and contrast the Egyptian Tomb Relief to the Roman Child’s Sarcophagus (above) in the Museum of Art and Archaeology.

The preparation of mummies: https://www.britishmuseum.org/collection/galleries/egyptian-death-and-afterlife-mummies

The Story of Osiris, Isis, and Horus: http://www.laits.utexas.edu/cairo/teachers/osiris.pdf

and a video from the Getty Museum: https://www.youtube.com/watch?v=-MQ5dL9cQX0