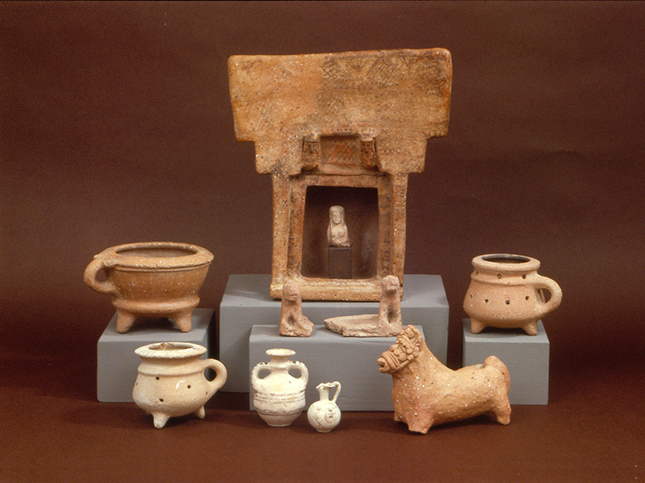 How do you see shapes and patterns being used in these objects?

What can you tell about the material used to make these objects? Why do you think that material was used?

This small shrine would have been used for worship in a home or small sanctuary. The shrine is miniature model of a temple style found mainly on the eastern coast of the Mediterranean Sea and on the island of Cyprus, areas where the Phoenician goddess Astarte was worshipped. The find spot of this and similar model shrines shows that Phoenician influence spread inland to the area east of the Jordan River known as Moab.

This model of a shrine is decorated with geometric patterns in red and black paint over a white slip. Above the doorway are two relief busts of a female figure, presumably Astarte, the goddess of love and fertility, to whom the shrine was dedicated. A figure of the goddess probably once stood in the shrine.

The objects found with the shrine give archaeologists important evidence for our understanding of religious rituals. The rhyton, a moldmade vessel in the shape of a bull or a horse, was used for pouring libations or offerings to the gods and for drinking during ceremonies; incense was burned in the two perforated bowls. (One of them is blackened on the bottom from where it may have been held over a fire.) The two miniature vases, both imitations of Cypriote vessels, demonstrate connections between Cyprus and this area. They may have been offerings to the goddess, or perhaps were also used for pouring libations.

What do you think archaeologists might learn from finding all of these objects buried together?

Can you think of things in your house that might tell people in the future more about you if they were found together? (For example, a toothbrush and toothpaste)

What do you think the full-sized temple that this shrine is modeled after might have looked like?

Compare and contrast this architecture to that of the temple ruins seen in The Lake of the Avernus.

Model shrine at the Louvre: http://www.louvre.fr/en/oeuvre-notices/model-shrine