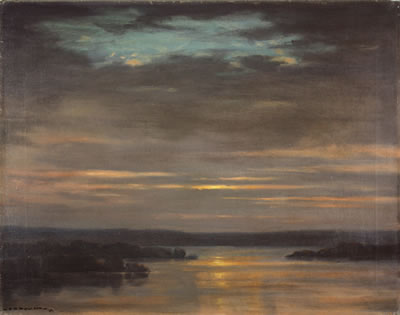 Frederick Oakes Sylvester (American, 1869-1915)
The River, 1904
Oil on canvas
Transferred from the Office of the Vice
Chancellor for Administrative Services, MU (2008.170)
Height: 51 cm Width: 64 cm
Additional images may be viewed in Argus

The Mississippi River is an important geographic feature for the state of Missouri. It flows from Minnesota to the Gulf of Mexico and shapes the eastern border of the state. The Missouri River is another major river in Missouri that flows west to east across the central region of the state and flows into the Mississippi near St. Louis. Both rivers have been an important means of transportation for North Americans for thousands of years. Native Americans used the rivers as sources of water to build agricultural societies and later Europeans navigated the rivers to explore North America and trade goods and resources along their banks.

Sylvester combines two styles of painting in his work: Regionalist and Impressionist. His observations of changing light and atmosphere recall the Impressionist interest in light and shadow. His Regionalist style is seen in his interest in nature and his choice to paint a specific place in America’s Heartland.

This particular work was exhibited at the Saint Louis World Exposition in 1904.

Read more about Sylvester’s life in Elsah and view more of his Mississippi River paintings:  https://archive.org/details/frederickoakessy00will