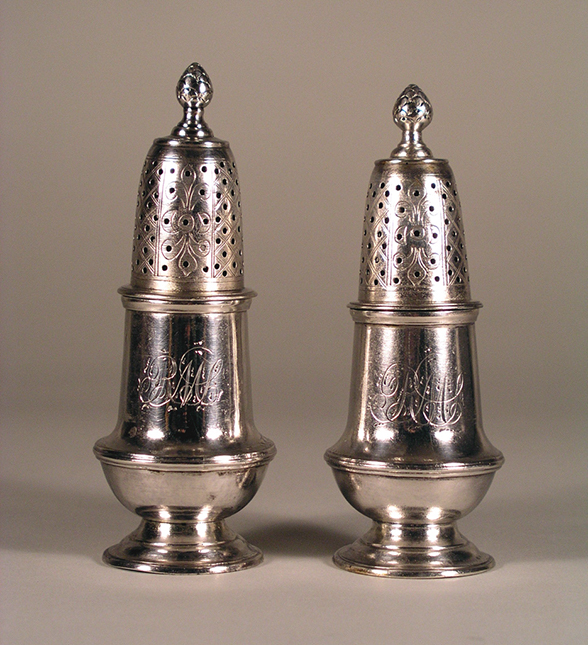 What do you think these might have been used for?

Why do you think these objects might be in the Museum’s collection?

These two objects are silver “pepper casters,” very much like the salt and pepper shakers we use today. During the eighteenth century, casters made in matching sets of three: a large one for sugar, and two smaller ones for pepper and mustard. The holes in the domes of the Missouri casters indicate that they were both used for pepper and would have held Jamaican and Cayenne peppers. Casters for mustard did not have holes in the dome.

These objects are examples of what art historians might call decorative objects. They are objects that are usually designed to be visually distinctive but were also made to be used rather than just a work of art. These objects can tell us more about the everyday lives of the people from that culture or time period, just like the pepper casters tell us about the kinds of spices people were using in the eighteenth century.

Paul Revere II was a master silversmith of colonial America, but he was best known as a hero of the American Revolutionary War. He was an active member of the revolutionary group, “Sons of Liberty,” and began his military service in 1756. He was promoted in 1776 to the rank of lieutenant colonel but he is most famous for his role as a courier for the Committees of Correspondence. Stamped into the bottom of each caster is the monogram “PR” inside a rectangle. This mark appears on small objects made by Revere between 1760 and 1770.

What decorative objects in your home might be found in a museum someday? What might those objects tell people in the future about your life?

Read the poem Paul Revere’s Ride: http://www.poets.org/viewmedia.php/prmMID/15640 by Henry Wadsworth Longfellow. Does this change your perspective on the peppercasters? If so, in what way?