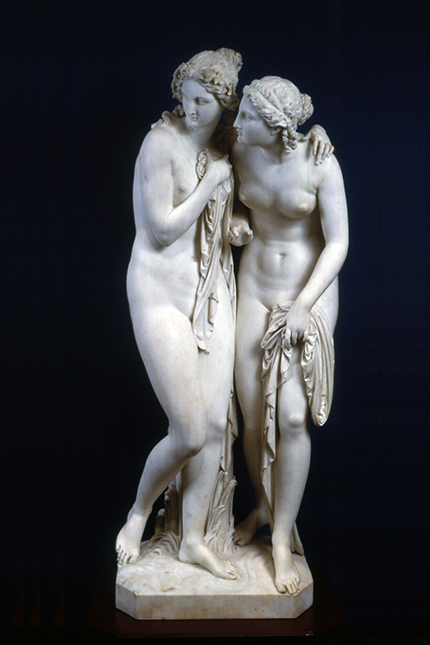 What do you think these women might be doing? What could they be looking at?

How do you think these women might be feeling? What do you see that makes you say that?

What might be different about looking at this work in person? What do you think it would feel like to touch this work? (Remember never to touch a work of art in a museum. It’s safe to imagine touching it though!)

This sculpture depicts two nymphs, beautiful young female spirits who lived in oceans, streams or on mountains. Their posture and the title of the work suggests that they are a little cold after just getting out of a bath. The figures are nude. Addressing Nudity in Art. The figures both look to our left, giving the sculpture an air of mystery. What are they looking at? Are they in danger?

By looking carefully, the viewer can also notice details about the location of the nymphs. There is a small cluster of reeds or other water plant behind them, and their feet cause little ripples in the marble as if they are standing on the edge of a stream or pond. One of the most notable aspects of this work is the way the artist creates these effects in hard, unyielding marble.

Johann von Halbig was a German sculptor whose works are largely in the style of Neoclassicism. Neo- is a prefix meaning “new” and classicism refers to the art and culture of ancient Greece and Rome, so Neoclassicism refers to a style in which people in more recent history refer back to ancient Greece and Rome and reference them in their art and culture. Neoclassicism was popular in the late 18th century and 19th century when archaeology became a popular area of study and the ancient city of Pompeii was rediscovered. Travel also became more convenient so more people were able to visit famous sites such as the Pantheon and Colosseum in Rome. The Bathing Nymphs are a good example of Neoclassical sculpture as they imitate an ancient style and depict mythological figures from the ancient world.

Compare and contrast with Abraham's Sacrifice of Isaac. Consider the subject of storytelling in art.

Compare and contrast with the bust of Hadrian as Diomedes. How are these works that are both carved of marble different?

Write a brief narrative about what you think is happening in this scene.

Sculpture Technique overview from the Victoria and Albert Museum: http://www.vam.ac.uk/content/articles/s/sculpture-techniques/