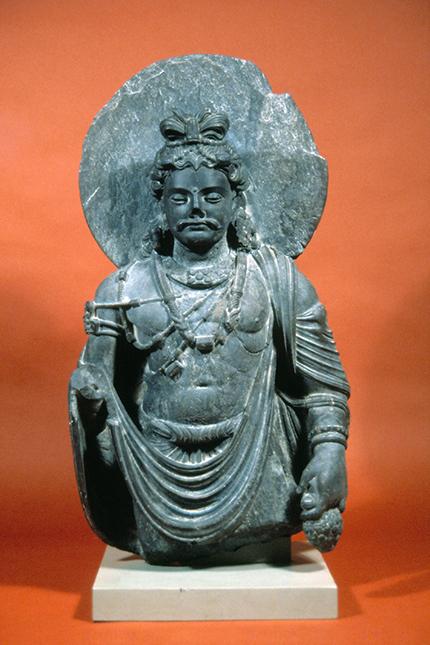 How might you describe the emotions of this figure?

What details do you notice about how the figure is depicted? Why do you think the artist might have chosen to include these features?

A bodhisattva is an enlightened being who has done everything necessary to attain nirvana, a profound peace of mind, but instead of progressing to that state, has held back in order to help other human beings who are still on the path to that goal. Maitreya is the bodhisattva who, according to Buddhist teachings, will be the next mortal Buddha to appear on earth. His name in Sanskrit means “friendly and benevolent.” Maitreya is shown with half closed eyes, a sign of his spiritual detachment. He is splendidly bejeweled and in his left hand he holds a flask, his defining attribute. He has the mark of Enlightenment on his forehead and a large halo.

This work shows Greco-Roman artistic influence from Alexander the Great’s invasion of India around 330 BCE. Such influence was strongly evident in the art of Gandhara, a region in the far north of ancient India, mostly now in northern Pakistan and an adjoining area of Afghanistan.

Compare and contrast with the Portrait Bust of the Emperor Hadrian. Can you see the Greco-Roman influence in the bodhisattva?