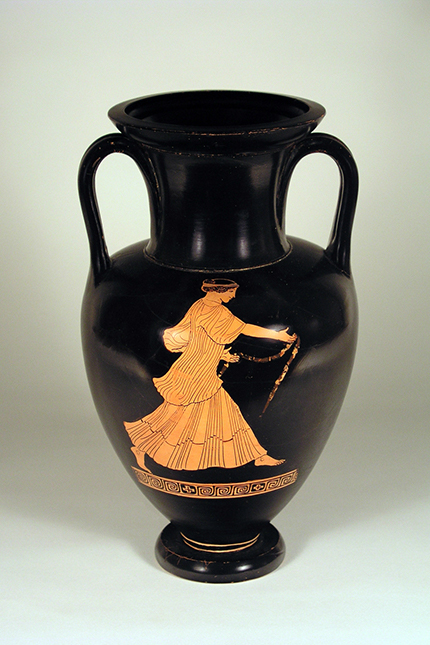 What do you think this vessel might have been used for?

What do you think this girl might be doing?

What image would you put on the other side of the vessel?

What interaction do you think these two figures might have?

The term Nolan amphora refers to this particular type of small, two-handled amphora, which was first discovered at Nola, near Naples, Italy. For more about the amphora see the Geometric Neck-Handled Amphora. This kind of amphora was probably used to hold wine at parties. The Greeks drank their wine mixed with water, so this vessel would have been used to hold the syrupy unmixed wine until it was poured into a larger vessel called a krater where it was mixed with water.

The decoration on this vase is relatively simple. This style of painting is called “Red-figure” because the background is painted black and the figures are left the reddish color of the bare pottery. An earlier style of Greek vase painted was the reverse and was called “Black-figure.” On this vessel, a young woman is running, holding a garland in her hands. A band with geometric designs serves as a ground line for her to stand on. The other side of the vessel shows a young man standing with a staff and with his hand outstretched, as if the young woman might run around the other side to catch up with him, or hand the garland to him. 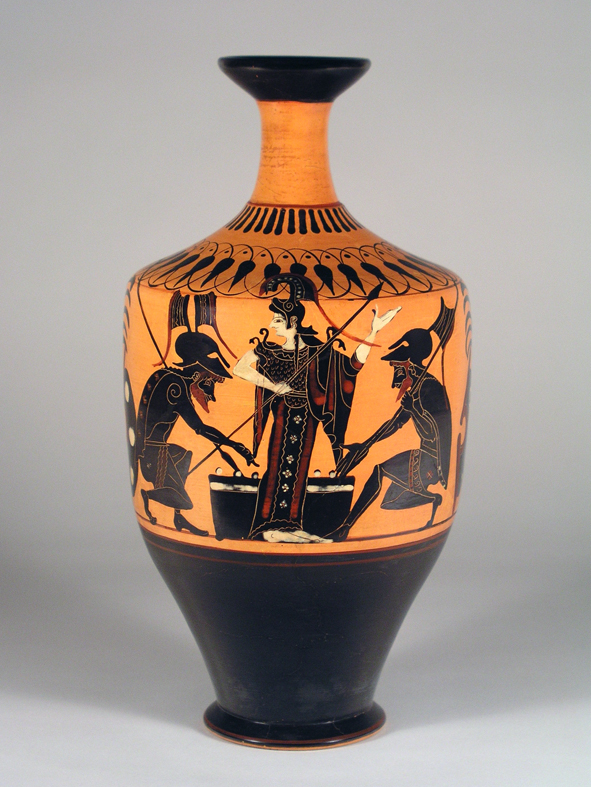 The artist Hermonax signed several vases, and his style has been recognized on more than one hundred others. Hermonax is called a follower of the Berlin Painter because he paints in a style that is very similar and may have been a student in the Berlin painter’s workshop. (The Berlin Painter is called this because there were examples of his vases identified in Berlin. The painter lived in ancient Greece). Both artists often painted single figures isolated against the black background like we see on this vase. Archaeologists and art historians study vase paintings very closely to group them by painters. For instance, even though Hermonax did not sign his name on this vase, we know he painted it because the unique way the eyes are painted matches those on vases that he did sign. The upper lid is convex instead of concave to the lower, and the iris is shown as a large black dot at the inner corner. This gives his faces an alert expression.

Compare and contrast with the Neck-handled Amphora.

Compare and contrast the example of black-figure pottery (left) to the featured red-figure vase.