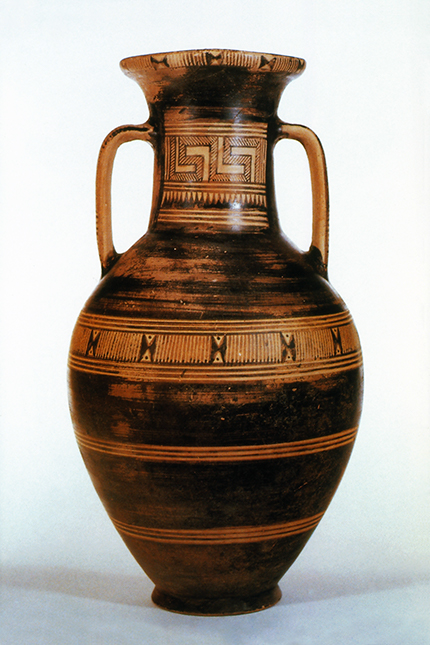 How do you think this object might have been used?

How do you see color, pattern, and shapes being used on this vessel? Why do you think the time period this vase comes from might be called the “Geometric Period?”

How might you describe the overall shape of this object?

This neck-handled amphora is an example of Middle Geometric pottery style. Archaeologists label the parts of ceramic vessels as if they were body parts, so the neck of the vase is the narrow part between the top and where it begins to widen. The handles arch over the neck of the vessel, so it is called a neck-handled vase. An amphora is a vessel shape that varies greatly, but usually has a narrow neck for pouring, and is wider at the top of the belly and narrows to a small foot or pointed base. When there is more than one amphora, they are called amphorae. For comparison, consider this "belly-handled” amphora. 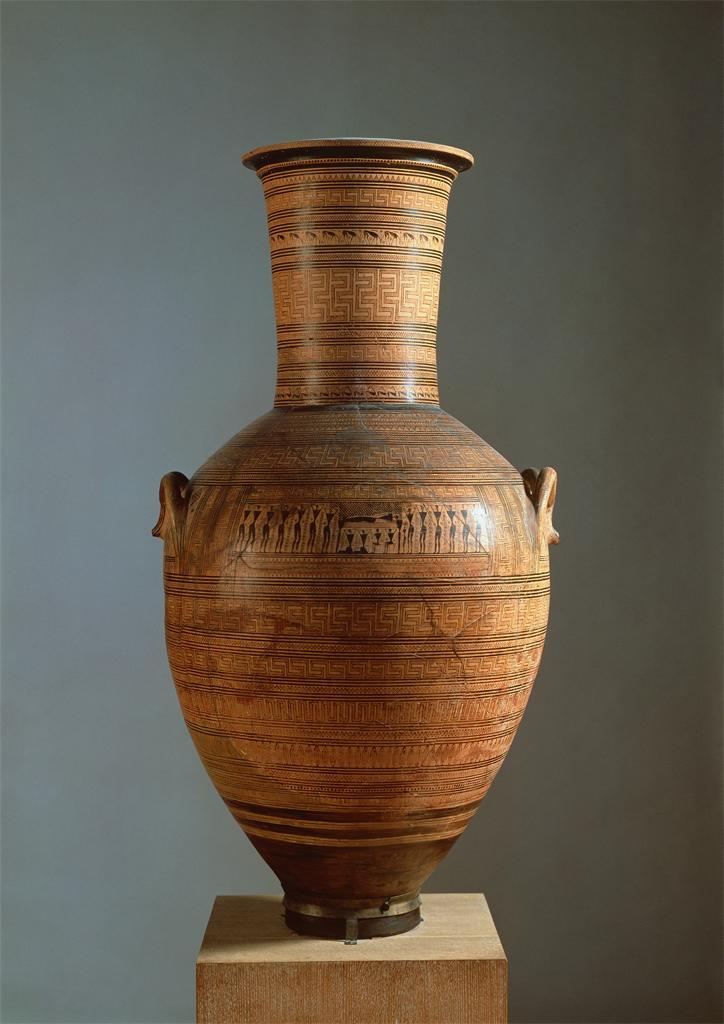 Both of these vessels would most likely have been used as grave markers (For more ancient funerary art, see the Egyptian Tomb Relief).

The body of the Museum’s amphora is mainly dark, with a decorative panel on the neck and around the belly. The bands of three lighter stripes that break up the large areas of dark on the body are a feature often found in a period called the Middle Geometric and help archaeologist date this vase to approximately 850-800 BCE. In the Middle Geometric period, different decorative motifs were also introduced, like the triangular patterns with groups of vertical lines which decorate the belly and lip of this amphora. The two triangles arranged point to point are called double-axes and are similar to other ax shapes found in earlier examples of Greek art. The shape of this amphora also shows a more obvious transition between neck and body than found in earlier vases, which tells archaeologists that the artist was using an improved potter's wheel. This is another clue that helps archaeologists date this pot and other objects that might have been found with it.

Fired clay is a virtually indestructible material. It does not decompose or disintegrate. Even if a pot breaks, the sherds will remain for thousands of years, and can be put back together like the pieces of a puzzle by archaeologists. Potsherds are one of the most common sources of evidence for archaeologists. By looking at the material, shape, and decoration of a sherd, archaeologists may be able to determine what time period it came from and thus what time period other artifacts found with that sherd came from.

About the Culture and Period

The Geometric Period in ancient Greece lasted from approximately 900 BCE to 700 BCE. This vase is a good example of why it is called the Geometric Period, because most of the art from this period includes decorative geometric shapes and designs. Also during this time, the epic poems of Homer were being told, Greek poleis (or cities) were being founded, and major temples and sanctuaries were built. This was a revolutionary time in Greek history.

What kind of geometric designs would you use if you were decorating a pot?

Compare and contrast with the Red-figured Nolan Amphora and the vessels found with the Model Shrine. 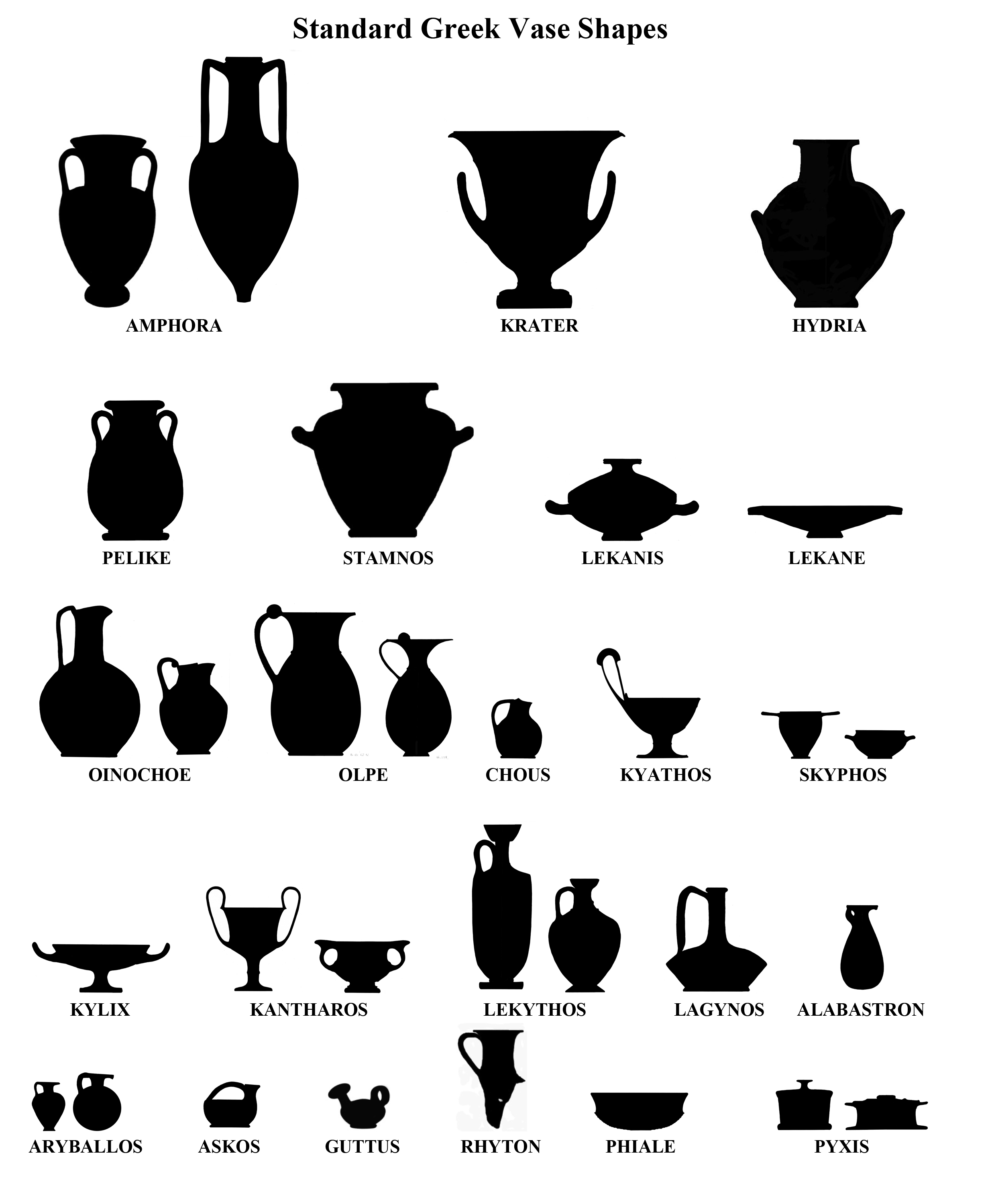 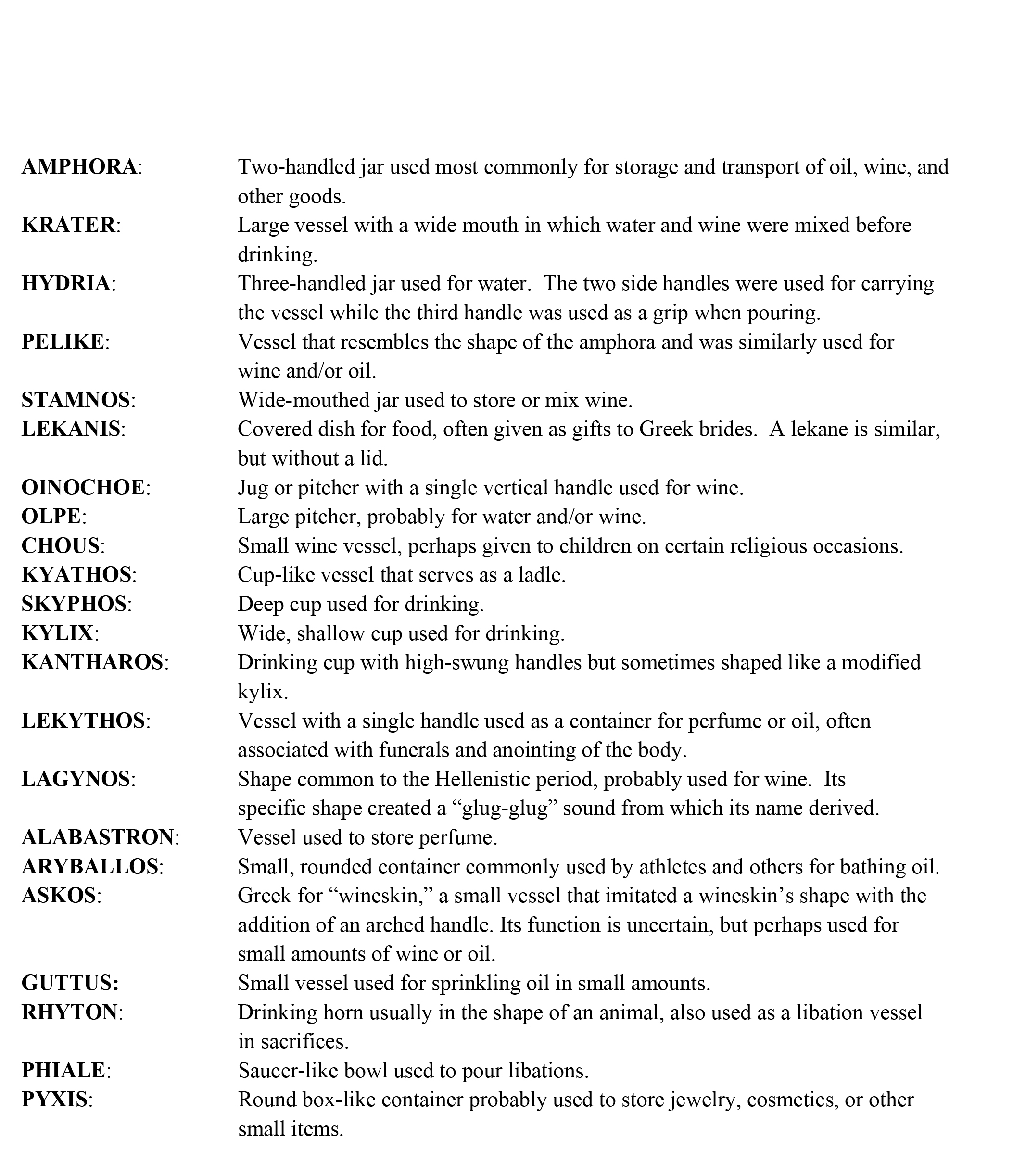