The Buddha Calling the Earth to Witness 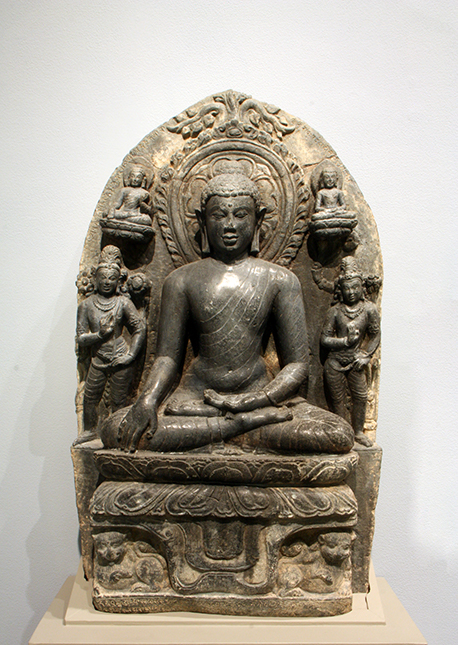 What does the size and placement of these figures tell you about their importance?

What details do you notice about how the figures are depicted? Why do you think the artist might have chosen to include these features?

This sculpture shows a scene from the life of Buddha, the central figure of the Buddhist faith.

During the time period that this was created, Hinduism and Buddhism were practiced in India, many sculptures like this one were created for use in religious sanctuaries, where they were set into niches in walls. The scene shown here is known as “Buddha Calling the Earth to Witness,” an act the Buddha performed as he was meditating. The armies of Mara, the god of desire, had been distracting him from attaining his goal of Enlightenment. When, however, he reached down to touch the Earth, calling her to witness that he had never interrupted his self-restraint, everything became clear, his torments ceased and he attained absolute Enlightenment. This act was a key moment in the life of the Buddha, and thus this pose and hand gesture have been used repeatedly for depictions of the Buddha in art.

In this sculpture, we can see Buddha seated in a meditative “lotus” pose with his legs crossed and the soles of the feet facing upward. His right hand reaches down to touch the ground in the gesture of Calling the Earth to Witness. He is also shown with several of the characteristic marks of Buddha: the cranial protuberance (or bump) on top of his head is a symbol of his supreme wisdom. The mark between his eyebrows is a symbol of his spiritual insight. The halo behind his head is symbol for his holiness and the circular marks on the soles of his feet are symbols of the “Wheel of the Law” or Buddhist doctrine. To either side of him stand two of his followers called bodhisattvas.

Compare and contrast with the Egyptian Tomb Relief. How do these artworks portray each culture’s ideas about religion?

Hinduism and Buddhism originate from similar regions in Asia. Compare and contrast this work with the Hindu Shiva Bhairava which was made around the same time as Buddha Calling the Earth to Witness. Are there any similarities in the ways these two religions portray their important figures?

Life of the Buddha, Metropolitan Museum of Art: http://www.metmuseum.org/toah/hd/buda/hd_buda.htm

A documentary on the Life of Buddha from PBS: http://www.pbs.org/thebuddha/